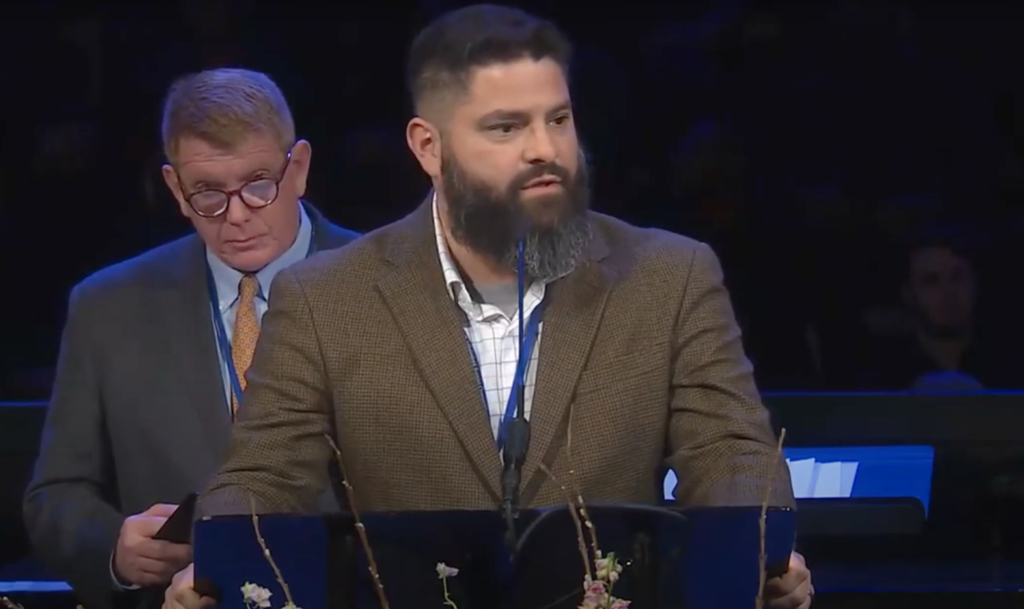 ric Sherwood, pastor of Gore Springs Baptist, makes a motion for the formation of a sexual abuse task force at the Mississippi Baptist Convention Annual Meeting on Oct. 26. The motion was not passed by the messengers.

Motions to create state-level sex abuse task forces failed at the 2021 state Baptist annual meetings in Mississippi and Missouri this week, although a motion on handling sexual abuse was unanimously approved in Arkansas.

A comparable motion presented at the California Southern Baptist Convention meeting Wednesday (Oct. 27) was ruled out of order, and a move to overturn that ruling failed. But a shorter, more general motion passed after about an hourlong discussion, said Terry Barone, spokesperson for California Baptists.

The failed motions in Mississippi and Missouri, worded similarly, would have required the respective state convention presidents to appoint task forces “to examine the issue of sexual abuse for the purpose of developing and recommending a plan” to the respective state convention “to facilitate” the ministries of churches and entities in the state.

Neither state motion called for an independent investigation, but would have required the task force, as worded in the Missouri motion, to examine history to ascertain “whether there were any patterns of intimidation of victims or advocates or resistance to sexual abuse reform initiatives.”

Scott Gordon, pastor of Claycomo Baptist Church in Kansas City, Mo., presented the motion during the Tuesday (Oct. 26) afternoon session of the Missouri Baptist Convention Annual Meeting at the Branson Convention Center in Branson. The motion failed by a vote of 500-266.

“It appears with what was brought from the microphone, there is a desire to wait and see what is going on on the national level (Southern Baptist Convention) regarding the task force motions that were there,” Gordon told Baptist Press. “My challenge with that is, that is to impact us on a national level as a convention, and I don’t think impacts us on a state level on our state conventions. … I think there was just a bit of confusion as to the intent of the motion in the bringing of the task force.

“It didn’t parallel,” Gordon said, “the motion that Grant Gaines (senior pastor of Bellaire Baptist Church in Murfreesboro, Tenn.) had brought in Nashville in June. It was far more a research, review and recommend type of motion.”

Nationally, an independent third-party review of the SBC Executive Committee is already underway by Guidepost Solutions. The investigation “into any allegations of abuse, mishandling of abuse, mistreatment of victims, a pattern of intimidation of victims or advocates, and resistance to sexual abuse reform initiatives” by the staff and members of the Executive Committee from Jan. 1, 2000, to June 14, 2021, conforms to a motion passed by messengers to the 2021 SBC Annual Meeting in Nashville.

Dennis Gard, pastor of Central Baptist Church in Eureka, opposed the Missouri motion because he believes it was premature and would replicate resources already available to churches, Gard told Baptist Press today.

“I’m always against any sort of sexual abuse and I definitely support anyone who has been a victim,” Gard said. “But at the same time, we at the state don’t need to necessarily take on any extra responsibilities that the national might do,” he said, referencing the Guidepost investigation.

Gard described sexual abuse as a local church issue, and said insurance companies and the SBC already offer resources that aid churches in preventing abuse and handling cases of abuse.

In Mississippi, state messengers defeated the motion 217-178 Tuesday afternoon, tweeted messenger Adam Wyatt, pastor of Corinth Baptist in Magee, Miss., and a member of the SBC Executive Committee. He said states should be proactive in helping churches respond to the issue of sex abuse.

In Arkansas, messengers voted unanimously Tuesday to create a “sexual abuse task force to ensure the policies and procedures of the Arkansas Baptist State Convention are above reproach in handling sexual abuse allegations.”