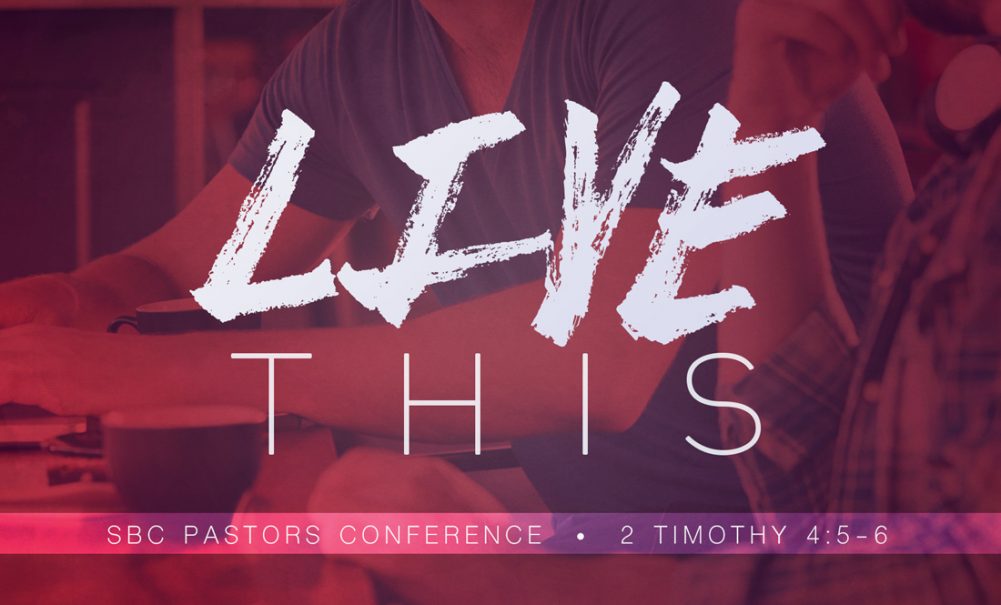 St. Louis | Speakers at the SBC Pastors’ Conference preached on one passage during the 2016 meeting in the Gateway City, diving deep into the apostle Paul’s instruction to younger church leader Timothy.

“Live This,” the theme of this year’s Pastors’ Conference, was taken from 2 Timothy 4:5-6, when Paul urges Timothy to “be serious about everything, endure hardship, do the work of an evangelist, fulfill your ministry.”

Ten preachers unpacked the Scripture passage, using their messages to urge leaders toward greater obedience, particularly in the area of evangelism, and to be mindful of the legacy they’re leaving.

“The last thing the nations need is the exportation of nominal Christianity from North America,” International Mission Board President David Platt preached in a message on “do the work of an evangelist.”

In his post at the IMB, Platt says he sees much of the broader missions world that is “gospel-less and gospel-lite.” Debates about whether or not to call Jesus the Son of God when conversing with Muslims. Practices that minimize the call to Christ in the gospel, assuring people that they can be both Christian and Muslim.

Platt asked, What does that have to do with us? “Missionaries are reflections of the pastors who train them and the churches who send them,” he said.

Jimmy Scroggins preached on Paul’s proclamation that he had “poured himself out” for the task of evangelism. The West Palm Beach, Fla., pastor opened his message by describing his diverse community. His congregation, Family Church, was named the ninth fastest growing church by a magazine, Scroggins said, which is the way it ought to be, because they live in an area with a lot of people who are far from God.

But even with their fast growth, “we are not making a dent in the millions of lost people right there within a few miles of our church,” he said.

Looking at recent statistics from LifeWay Christian Resources, it’s apparent churches across the SBC are facing similar challenges, Scroggins added. He gave conference attenders four steps by which churches and leaders can pour themselves out for the task of evangelism, starting with investing in far-from-God people.

Scroggins told the audience how, as a pastor in Kentucky, his church had been winning people to the Lord, but they were “nearly saved” people. In West Palm Beach, it was a different story. Some people may say evangelism just isn’t their lane, he said.

“If your lane does not take you and your church to far-from-God people, change lanes.”

Take them with you

As they looked at 2 Timothy, Paul’s final letter, several of the Pastors’ Conference speakers preached on endurance and legacy.

He shared advice he received when his church went through a particularly difficult conflict. “Get low and stay low. Lean on the Lord as never before. Learn everything I can. Be loud about the things that God is teaching me, and silent about everything unfair, unkind, and untrue. And then finally, and maybe most importantly, leave the rest with God.”

Speaking during the final session of the Pastors’ Conference, Johnny Hunt also shared advice that has influenced his ministry. When he was in his 30s, Hunt said, Jimmy Draper, former president of the Baptist Sunday School Board, told him, “If Jesus continues to use you, bring the next generation with you.”

In the passage at the center of “Live This,” Hunt said, there is a selflessness in Paul’s concern for Timothy and the success of the gospel ministry after he’s gone. We never know when the race ends, said the pastor of First Baptist Church, Woodstock, Ga., urging pastors to obedient action.

“It’s not the truth we know that changes us. It’s the truth we obey. We’re living in a generation of great knowledge. But the question that comes to my own soul: Is there equal obedience?” Hunt asked.

– With reporting by Baptist Press