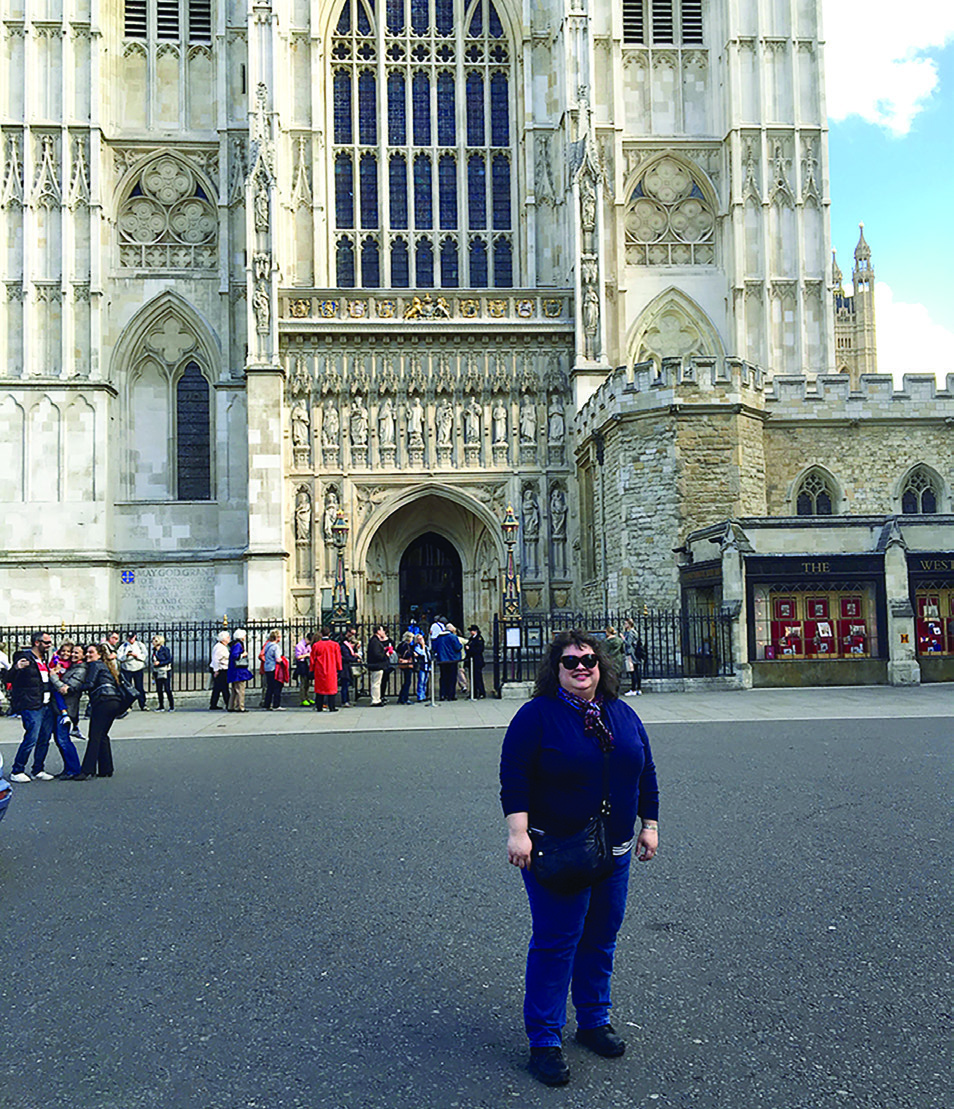 REAT, EMPTY EDIFICES – Lisa Sergent (photo above) stands in front of the entrance to Westminster Abbey in London. Behind her a line of tourists and a few worshippers gather for the Sunday evening service. (Next page) Open six days a week for visitors with an admission charge of nearly $30 per adult, the Abbey relies “almost entirely on paying visitors and tourists” for its income, says the sign out front.

Times have changed. We all know social and cultural values have recently experienced massive upheavals in western nations. Religion has played a major role in these changes. Missions work is no longer tolerated in places it once was. Working to fulfill the Great Commission can no longer be done so openly.

Coinciding with these cultural shifts are changes within the Southern Baptist Convention’s largest missions sending agency. The International Mission Board (IMB) is adapting the way it does missions. When IMB President David Platt stepped into the role in 2014 he soon discovered the agency was facing a budget overspend of more than $200 million. Personnel costs would have to be greatly reduced with action being taken quickly. With a major and largely voluntary staff reduction in 2015, going from nearly 5,000 missionaries and staff to 3,800, IMB expects have a balanced budget in 2017.

The changes included cutting most of the communications team serving in Richmond, and replacing them with a small team of young communication specialists stationed at points all around the world. With them comes new strategies for engaging Southern Baptists with missionaries that take into account the risky business of gospel witness.

Not your mother’s mission magazine

You may have noticed the stories about IMB missionaries have changed. Remember Commission magazine, with its glossy photos and National Geographic style? Today’s mission stories are not written in a long, detailed format anymore. We don’t often see photographs of missionaries’ faces. The name of the countries where they serve may not be reported. There is a good reason for this. A very good reason.

“There’s spiritual warfare on the front lines,” a member of the media team shared. “A battle is going on against the spread of the gospel.”

For example, one missionary took all the necessary precautions. But when a photo that had been taken years earlier was found online it led to his undoing. Somehow a person in the country where the missionary was serving connected it with some other information online to learn the missionary’s true identity. It almost cost him his life.

He walked, unsuspecting, into a meeting and found the atmosphere was charged with anger. People once friendly were now menacing as they kept him there for hours shouting, “Is this you? Did you say this?” When he was finally allowed to leave, he gathered his family and they fled the country. His identity had been compromised and it was no longer safe for them to continue to spread the gospel message in that country.

The missionary life can require living in countries where it’s dangerous to be a Christian. But it can also be risky living in “safe” countries among those same people groups that are hostile to Christians. There are parts of Africa and Asia that have always been high risk and high security for missionaries. With the increased mobilization of people, now it’s not just there, it’s everywhere.

In other cases, the country may feel it is already a Christian nation and therefore does not need to admit anyone into the country for the express purpose of doing mission work. In those places, missionaries enter as workers who are in the country to do charity work or other vocations.

If you visit the International Mission Board’s website, IMB.org, you can read its mission statement, “Our mission is evangelizing, discipling, and planting reproducing churches among all peoples in fulfillment of the Great Commission.”

In today’s world, technological advance has produced security issues, so can the missions stories be told to the people back home in the pews? It’s becoming more and more challenging. Things aren’t as simple as when Lottie Moon would write about her work in China and send the letter to Annie Armstrong to be copied (and recopied) by hand or typewriter, and distributed across the United States.

For years the National Woman’s Missionary Union’s prayer calendar in Missions Mosaic magazine has contained a birthday prayer calendar for missionaries. It listed their names and the countries where they served. In recent years, fewer real names or locations can be shared. Quite often a pseudonym will be used along with a region of the world, “South Asia,” for instance.

While the IMB remains committed to telling the story back home, they are having to become more and more creative in doing so. Lengthy articles are now less common and story vignettes are better vehicles not only due to safety concerns, but also for ever shrinking attention spans.

This has caused the IMB to shift the way it creates the content of a story, looking more at the concept that describes the missions work. As a member of the media team said, “There are avenues of telling the story without focusing on people in specific locations. We’ve had to shift the way we’re doing content altogether.”

The use of social media including Instagram, Facebook, and Twitter is proving to be a good way for Southern Baptists to stay informed about missions. It connects with younger generations who need also to learn the importance of giving to missions through the Cooperative Program.

The IMB website has undergone a complete retooling and now sports a fresh look that supports this challenging new media world.

Another change is in the reporting on the safety of missionaries after breaking news events. Southern Baptists often express interest in how an event affects missions efforts in those areas. According to their website, “Due to security considerations for IMB personnel and the national believers with whom they work, we usually don’t discuss their locations. However, with any breaking news event, we are in contact with anyone who might be affected, due to travel or other reasons, to confirm their safety and security.”

A media team member summed it up: “The missionary life, missions sending, it’s always changing. There are always new security challenges necessitating a new way of telling their stories. Most of our missionaries, we can’t print their names.”

Lisa Misner Sergent will focus on London, a world city with many people groups, in her next report.