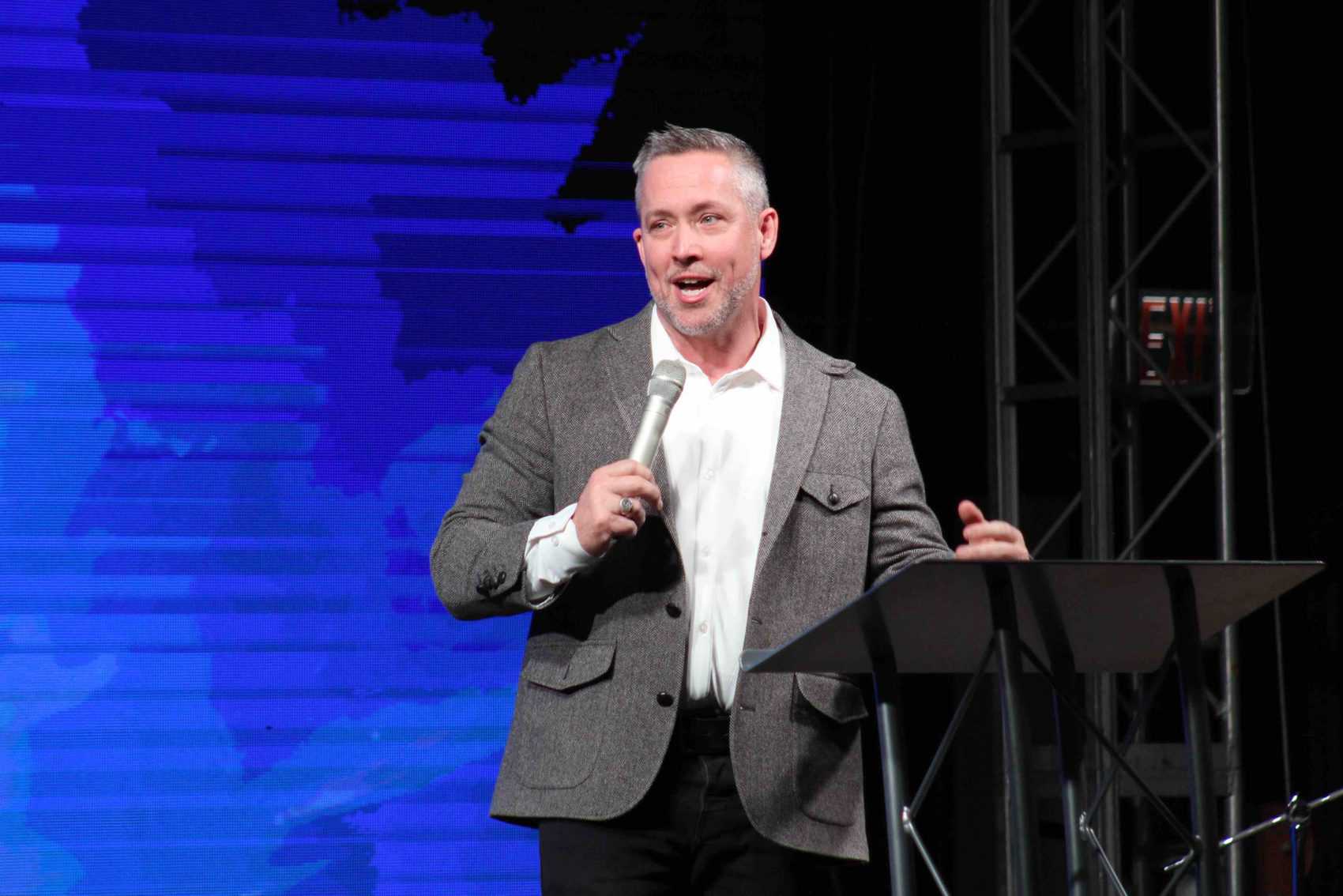 Southern Baptist Convention President J.D. Greear addressed the country’s hostile political climate, and the church’s place in it, at a gathering of more than 1,000 Baptist leaders from the Midwest.

Evangelism is the core calling of the church, Greear told leaders gathered in Springfield for the 2020 Midwest Leadership Summit. That means we have to avoid other things that are going to distract us from the gospel, said the pastor of The Summit Church in Raleigh-Durham.

“We’re not the first people in the history of the church to have a politically divided society,” Greear said. First-century Rome had all kinds of political problems, he noted, but the New Testament apostles mostly avoided discussion of those things.

“It’s not that Christians don’t have anything to say to Washington D.C. or to Rome,” Greear said. “We do and we should. [It’s] just that when that becomes the focus of the church, our message is obscured.

“You realize that in our political climate, the moment that we are seen as the stooge for one political party, we’re going to lose all audience with the other.”

In Luke 12, Greear preached, a man came to Jesus with a family dispute involving his brother. Jesus had a shocking response to the man’s story, which Greear called a “genuine social justice complaint.” Instead of resolving the dispute, he preached a sermon on greed that applied to both brothers.

Jesus didn’t respond that way because he didn’t care about justice, or because he was insensitive about injustice. Indeed, Greear said, Jesus’ ministry was about bringing the justice of the kingdom of God. But he knew getting involved would take away from his central task, and create a barrier between him and some of the people he was called to reach.

“When we tie our message too closely to a political platform,” Greear warned, “we put an unnecessary obstacle in the way of the gospel for at least half of our mission field.” And we can’t afford to write off half our mission field, he said.

Clearing the path
Some pastors have told him they speak about their political opinions sometimes, Greear said, but they keep it separate from the official message of the church. “Congregation members just don’t have that category,” Greear countered. When it comes from the pastor, he said, people associate with the central identity of the church, and conflate it with the core message.

Speaking about the country’s political climate, Greear said he had people in his church who agree with current leaders and policies, and people who don’t. He acknowledged the Baptist leaders gathered in Springfield also differ on the issues, and could have said, “Amen,” as he was describing either side. Grinning, Greear thanked the crowd for exercising their “legendary Midwest restraint,” the room echoing with laughter.

He recounted the story of a woman who visited his church and later told him that she actually had first “met” him on Twitter, when they had interacted about abortion and Greear’s pro-life positions.

“Eventually I was overwhelmed by the truth of the gospel and I got saved,” she wrote Greear in a letter after making her profession of faith in Jesus. She had known the pastor’s positions on certain issues, but because he didn’t make his church “the Republican church,” she said, she came and heard and responded to the gospel.

“Now I feel like I’m relearning everything,” she wrote, “and I just want to thank you for not putting politics in my path to the gospel.”

Politics is important to him, Greear acknowledged. But her soul and others like her are even more so. “Don’t we care about almost half the country that identifies with her?”

“We’ve got to be equally clear on the wrongness of injustice or racial discrimination; the dignity of the immigrant; and our responsibility to care for the poor. We’ve got to speak out, even if it’s unpopular, and even sometimes if it means backing policy that supports it.” That’s what it means to be salt and light in our communities, he said.

“But we’ve also got to realize that conscientious Christians can disagree about the best applications of certain social policies. And where Scripture does not draw a direct line between a virtue and a policy, well, neither should we.”

In Matthew 11, Greear noted, the list of disciples Jesus called includes two men on opposite sides of one of the most divisive political issues of their day. Simon the Zealot and Matthew the tax collector would have disagreed about how to deal with the Roman authorities over them.

“At the end of the day, those disciples had something greater in common in their love of Jesus than they did in the things that divided them in a strategy about Rome,” Greear said. Can we do this too, he asked Midwest leaders. “Can we second our important convictions in light of our most essential one?”

“Unity in our churches around the gospel is more important than absolute uniformity of our politics.”