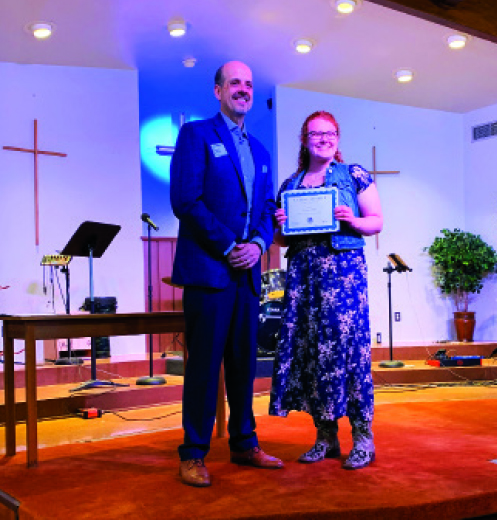 Reagan Webb with BFI Board chair David Grove at the award's dinner.

Scholarship recipients from as far south as Anna, up to Hoffman Estates, and communities in-between gathered in Springfield for the first Baptist Foundation of Illinois Scholarship Dinner. BFI awarded a record $101,750 to 49 college and seminary scholarships for the 2022-23 academic year.

Reagan Webb, a member of Logan Street Baptist Church in Mt. Vernon, who plans to major in pre-med at Liberty University and become a neonatologist, was one of the recipients.

She made the decision to go into medicine while her mother was in treatment for breast cancer in 2017. “She’d tell me; ‘You would make a great doctor,’” Webb said.

Webb expressed her appreciation for the scholarship. She said it “helps our finances because we’re still paying a lot of medical bills. It’s cool that it’s from a Baptist organization. That makes it special.”

Her father, Chris, said Reagan graduated as co-valedictorian of her class. He shared his thankfulness for the scholarship and the ways “God has provided financially to move her along the path he has for her.”

The dinner held May 20 was attended by 24 scholarship recipients and their families along with 11 of the Foundation’s Board of Trustees.

The next BFI Scholarship application period will be January 1-31, 2023. For more information about the scholarship program, visit baptistfoundationil.org.