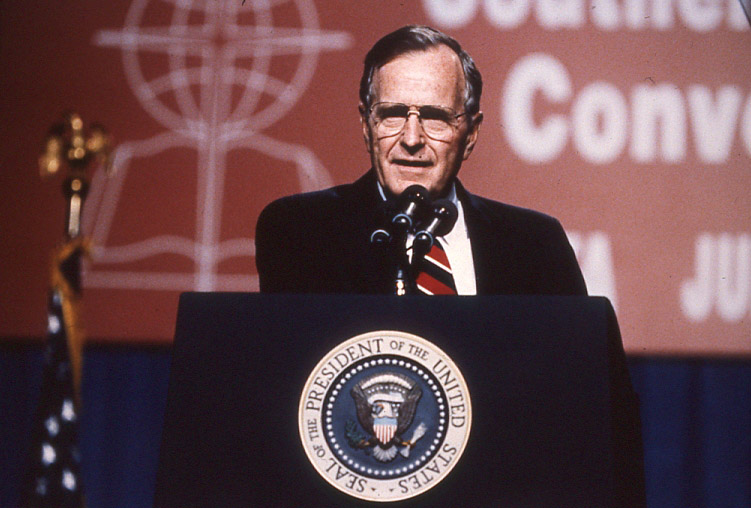 "For me, prayer has always been important, but quite personal, President George H.W. Bush told the SBC in a 1991 address. SBHLA photo.

President George H.W. Bush, who died Nov. 30 at age 94, is being remembered by Southern Baptists who knew him as a “warm,” “cordial” man who “felt right at home with people who loved God and His Word.”

Bush held the U.S. presidency from 1989-93 following eight years as vice president. He is the last president to address the Southern Baptist Convention annual meeting in person. An Episcopalian, Bush professed faith in Christ and met with SBC leaders both during his 1988 presidential campaign and during his time in the Oval Office.

“At my invitation in 1991,” then-SBC President Morris Chapman told Baptist Press today (Dec. 3), “President Bush spoke to an overflow crowd of convention messengers at the annual meeting in Atlanta. It was very apparent that he felt right at home with people who loved God and His Word, and he was welcomed with numerous standing ovations.”

Bush’s commitments to “school choice,” “defense of the unborn” and “attendance at public worship” during his presidency, Chapman said in written comments, “were not a matter of political expediency.” They were “consistent hallmarks of a man of principle, faith and dignity.”

Chapman, who served as SBC Executive Committee president from 1992-2010, added, “I had several occasions over the years, whether as president of the Southern Baptist Convention or its Executive Committee, to observe him in public and private settings. He was truly a man of great character.”

Bush’s 17-minute address to the SBC in 1991 touched on religious liberty, the sanctity of life and the need to strengthen families among other topics. But Bush became visibly emotional, fighting back tears, only when he began to speak of prayer, describing how he sought God during the Persian Gulf War of 1990-91.

“For me, prayer has always been important, but quite personal,” Bush said. “You know us Episcopalians. And like a lot of people, I worried a little bit about shedding tears in public for the emotion of it. But as [my wife] Barbara and I prayed at Camp David before the air war began, we were thinking about those young men and women overseas. And I had the tears start down the cheeks, and our minister smiled at me. And I no longer worried how it looked to others … We realized that in prayer what mattered is how it might have seemed to God.”

Bush also spoke to Southern Baptists about the collapse of the Soviet Union, which culminated six months later when the U.S.S.R. officially dissolved. In the Soviet Union, Bush said, “places of worship long stood silent and subdued, forced underground by the iron fist of the state. But now, churches and synagogues and the mosques buzz with life, reclaimed by the people, joyfully emerging to proclaim their faith anew.”

Jerry Rankin, International Mission Board president from 1993-2010, told BP he feels an “awesome sense of the providence of God” when considering Bush’s role in the Soviet Union’s collapse and the Gospel’s subsequent advance in the region.

The former Soviet bloc was part of an “emerging world that valued freedom and democracy, in which the suppressed people and the injustices and the oppressions had just reached a point that something would happen to bring about … change,” Rankin said. The U.S.S.R. “was ready to boil over and open up. God just used [Presidents] Reagan and Bush and American diplomacy as pressures to bring that about.”

When the Soviet Union fell amid Bush’s presidency, Rankin said, “an open door to missionary presence” emerged in Eastern Europe, and the region’s churches “unleashed their potential,” carrying out “a massive harvest and proclamation of the Gospel.”

According to the National Right to Life Committee, Bush “urged the Supreme Court to overturn Roe v. Wade,” vetoed 10 bills “that contained pro-abortion provisions” and prohibited abortions on U.S. military bases “except to save the mother’s life.”

At times, Southern Baptists also disagreed with Bush. In 1990, BP reported some Southern Baptists objected to Bush’s invitation of homosexual activists to a White House ceremony. In 1991, the SBC adopted a resolution expressing opposition to a $25,000 grant by the Centers for Disease Control to fund the National Lesbian and Gay Health Conference. Another 1991 resolution criticized Bush for not opposing government funding of “pornographic” and “sacrilegious ‘art'” through the National Endowment for the Arts.

Overall, however, Bush appeared to enjoy a good relationship with Southern Baptists.

During his 1988 presidential campaign, Bush met with about three dozen evangelical leaders, including Chapman, then-immediate past SBC President Adrian Rogers and then-SBC President Jerry Vines, BP reported. During his time as president, he met with Vines in the Oval Office.

“I was honored to meet with President Bush in the Oval Office,” Vines told BP via email. “He was welcoming, warm and cordial. The privilege to pray with and for him was very special to me.”

Richard Land, who became executive director of the SBC’s Christian Life Commission in 1988, said he considered the possibility of becoming a member of Bush’s administration. During that year’s presidential campaign, George W. Bush went to visit Land at Criswell College, where Land was vice president.

George W. Bush told Land “if his father won, he hoped I would consider coming to Washington and helping them” in an administration job, Land told BP. Land responded he was interviewing in two weeks to lead the CLC.

Land was indeed called to the CLC, but he went on to meet with George H.W. Bush on several occasions while Bush was president.

“I always found him to be very courtly, very well-mannered, an almost patrician presence,” Land said. “When you think of a president, you kind of like to think of a guy like George Bush.”

Evangelist Billy Graham may have been the Southern Baptist with whom Bush was most comfortable discussing faith. Bush and Graham vacationed together and attended church together on occasion, and Bush sought Graham’s spiritual counsel for his children, according to the 2008 book by Nancy Gibbs and Michael Duffy, “The Preacher and the Presidents: Billy Graham in the White House.”

Bush advisor Craig Fuller said there were seasons of Bush’s life in which it seemed “Billy Graham was the one person he was communicating with, and talking to, about his faith,” according to “The Preacher and the Presidents.”

Bush assessed his own faith in his 1988 book “Man of Integrity,” addressing whether he had been born again.

“If by ‘born again’ one is asking, ‘Do you accept Jesus Christ as your personal Savior?'” Bush wrote, “then I could answer a clear-cut ‘Yes.’ No hesitancy, no awkwardness. But if one is asking, ‘Has there been one single moment, above any others, in which your life has been instantly changed?’ then I can’t say that this has happened, since there have been many moments.”

On Bush’s final day of life on this earth, he asked his friend James Baker, Bush’s former secretary of state, “Where are we going today?” USA Today reported. When Baker replied, “We’re going to heaven,” Bush said, “Good. That’s where I want to go.”