On my last Sunday at my southern California church ten years ago, my pastor surprised me by calling me up to pray for my upcoming move. Friends surrounded me as his voice echoed across the school gym. “Lord, be with Meredith as she moves to Indiana.”

My head still bowed, I cracked open one eye to see if anyone else had noticed his mistake, but everyone was still praying. In California, “I” states are one and the same, it seems.

A week later, I moved to Illinois without much more Midwestern familiarity than my kind pastor. I was excited about my new job at IBSA—telling the stories of churches working hard to make a difference in their communities. But that’s all I knew. My new home was a dot on a map in the middle of a state I had visited only twice. 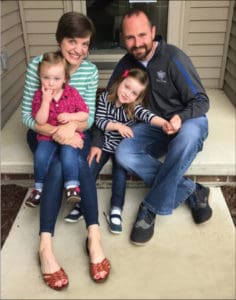 Next month marks my first decade in Illinois, and I feel compelled to celebrate it in some way. This is where I’ve spent the largest portion of my adult life—certainly the most meaningful part (I came to Illinois as a party of one and now travel in a family of four). This anniversary is coinciding with my church starting a new Bible study of the book of Genesis, and while my journey to Illinois obviously doesn’t compare to Abram’s, I wonder if he felt about God’s words in Genesis 12 the way I once felt about our state.

“Go…to the land that I will show you.”

On the surface, the words are so vague. It seems God is sending Abram to a nameless place, just another “I” state indistinguishable from the rest. If I were Abram, I might have wondered whether God even really knew where he was sending me.

Of course, we have the benefit of the rest of the story as told in Scripture. And, on a less epic scale, I have the benefit of 10 years in a place I now can’t imagine leaving. God kept his promise to Abram, eventually giving him a new name and leading his descendants to the land he’d promised. For me, God gave me work to do and new names to learn and stories to tell that has led to a rootedness I never would have expected. My native Illinoisan husband and two precious daughters who call our “I” state home bear witness.

The weekend I moved to Illinois, I stood at the edge of a cornfield, grinning for a photo to send to my friends that would prove I wasn’t in Kansas anymore—or San Diego, or New York City, or Atlanta, or my hometown, Memphis. (Illinois. I’m in Illinois.) The novelty of corn growing over my head has since worn off, but in its place is the gift of 10 years over which God has proven his control and his goodness again and again. And that feels worthy of celebration.