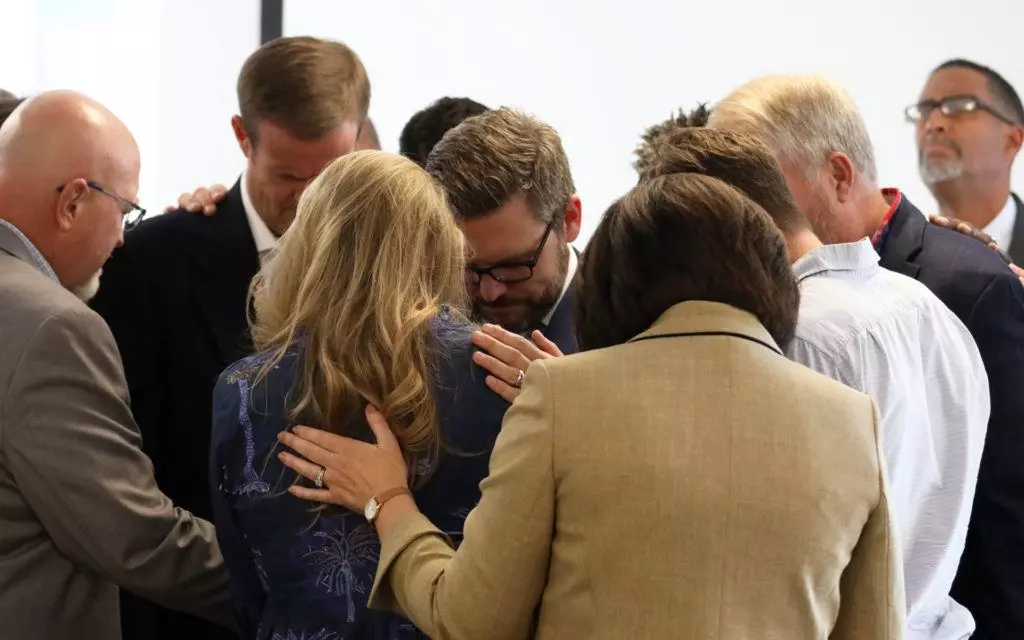 Trustees of the Ethics & Religious Liberty Commission pray for Brent and Meredith Leatherwood following the announcement of Brent's election as the next president of the ERLC. (Baptist Press/Brandon Porter)

Brent Leatherwood says he senses a new spirit of cooperation among Southern Baptists. Previously “people were quick to criticize…to assume the worst,” he said. “My sense is that may be diminishing…. I think Baptists are realizing we can work together and be a voice that helps improve the situation” in the current culture.

If that’s the case, it will benefit Leatherwood as he takes the reins permanently at an SBC entity whose previous leadership was called fractious. Leatherwood was elected to head the Ethics and Religious Liberty Commission at the ERLC Trustees fall meeting in Nashville, Tennessee on Sept. 13.

His nomination and approval came after a year as Acting President following the resignation of Russell Moore. Moore had opposed leaders of the SBC Executive Committee (EC) over their handling of sexual abuse claims in SBC churches. Before that he drew fire from pastors who opposed his political positions on immigration and other Trump administration policies.

Leatherwood will spend his early days rebuilding relationships. “I’m actually going to be speaking to pastors across the SBC to listen to them, hear from them,” he said, before speaking on behalf of 14 million Southern Baptists, he told Baptist editors.

Leatherwood came to the ERLC staff in 2017 after four years as Executive Director of the Tennessee Republican Party. He was first Director of Strategic Partnerships, then Vice President of External Affairs and Chief of Staff under Moore.

Leatherwood’s election to the ERLC presidency was welcomed by leaders in Illinois and in the national SBC. “Southern Baptists need a biblically grounded, winsome, effective ERLC in these challenging times,” ERLC trustee Scott Foshie from Illinois said, “I believe Brent is the leader that God has called to lead in carrying out this exciting ministry assignment that is also fraught with challenge.”

At the 2022 SBC Annual Meeting in Anaheim in June, Leatherwood turned aside criticism of the ERLC and efforts to defund it. Instead, he pointed to a renewed mission after the U.S. Supreme overturned Roe v. Wade to have impact on pro-life legislation on the state level.

In an interview with Baptist news editors Thursday, Leatherwood said, “Our state conventions are now at the forefront of this discussion because overnight a federal discussion… now is significantly more a state-level discussion. And so in Illinois, partnering with Illinois Baptists is going to be a priority,” he offered as an example.

“We want to come alongside our state convention partners and have conversations with their legislators about specific changes to their state code,” Leatherwood said, citing tax changes in Utah that involve fathers and Georgia legislation that controls of abortion-related medications.

That is especially relevant in pro-abortion states where even small pro-life moves represent progress.

Leatherwood was not among a large field of candidates at first, according to search team chair Todd Howard, but he “became the top candidate by virtue of his leading well through the various challenges facing the commission during the interim season. He has intangible leadership qualities that we could not ignore.”

On his professional biography at LinkedIn.com, Leatherwood calls himself “a bridge-builder who values the importance of institutions in our nation’s civic life.” What became clear in the last two years is the considerable bridge-building that must be done by ERLC within the denomination and with the people in the pews. Leatherwood has mostly stayed away from issues that seemed to distance Moore’s ERLC from grassroots Southern Baptists. And he has operated more openly with ERLC trustees.

“Over the last year, Brent has worked to develop processes to enhance communication and transparency for our board,” said Foshie, former pastor of Steeleville Baptist Church and presently IBSA Health Team Leader. “This leads us to have a high level of trust and optimism as we think about the future of the ERLC under Brent’s leadership.”

“He has done an excellent job stepping in as interim,” said Sharon Carty, an Illinois representative on the Executive Committee. “He is a strong man with a gentle nature which is so beneficial in roles of leadership.”

Leatherwood is a 2003 graduate of the University of Central Florida. He served as a legislative aide to Florida congressman Connie Mack on Capitol Hill, among other political and campaign positions. He and his wife, Meredith, have three children. They live in Nashville.