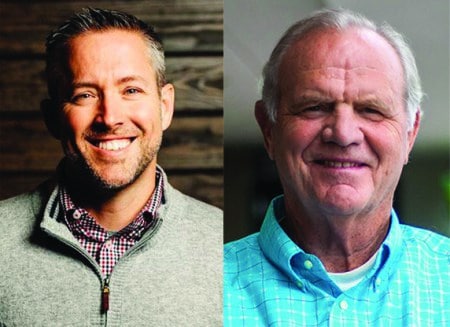 Southern Baptists will convene in Dallas next week, looking to put several divisive months behind them and unite around the purposes they have in common.

“This shocked us, but it did not shock the Lord,” Gaines said. “I believe God has allowed all of this to happen to drive us to our knees. He is calling us to repent of any sin in our lives and seek His face in humility and faith. And if we will humble ourselves and pray, I believe God will be glorified in and through us as we gather in Dallas.”

Leadership will be a major theme of the June 12-13 meeting, as Baptists elect a new president to follow Gaines. J.D. Greear and Ken Hemphill are the two candidates who have announced their intentions to run. Their election, which echoes the 2016 race in St. Louis between Greear and Gaines, is set for 1:50 p.m. Tuesday.

J.D. Greear and Ken Hemphill will be nominated for SBC president when Baptists convene in Dallas next week.

The annual meeting will also include reports from three SBC entities currently led by interim or outgoing presidents. The Executive Committee’s interim president, Augie Boto, will report Tuesday, while International Mission Board President David Platt, who announced earlier this year he will leave the role to return to the pastorate, will bring his report Wednesday morning.

Southwestern’s report will be of particular interest to those watching the proceedings. Jeffrey Bingham was named interim president after trustees removed Patterson, first naming him president emeritus and then terminating his employment because of comments and actions related to the treatment of women. All six Southern Baptist seminaries will present a unified report Wednesday morning.

Patterson was scheduled to preach the convention sermon until he withdrew from the role June 8. In a letter to the “Southern Baptist Family,” Patterson acknowledged his “poor choice of words…in and out of the pulpit,” but defended himself against allegations that he discouraged the reporting of sexual assaults at the two seminaries where he served as president.

In place of Patterson, Pastor Kie Bowman of Hyde Park Baptist and The Quarries Church in Austin, Texas, will preach the convention message Wednesday morning.

The role of women in the SBC figures to be another major theme at the 2018 annual meeting, which marks the 100th anniversary of women serving as voting messengers to the convention. Kathy Litton and Suzie Hawkins have submitted a resolution celebrating the milestone, and Midwestern Seminary President Jason Allen has submitted a resolution on “affirming the dignity of women.”

The Illinois Baptist will be in Dallas reporting from the meeting and the SBC Pastors’ Conference, which begins Sunday, June 10. Follow our coverage here at IllinoisBaptist.org, and on Facebook and Twitter.