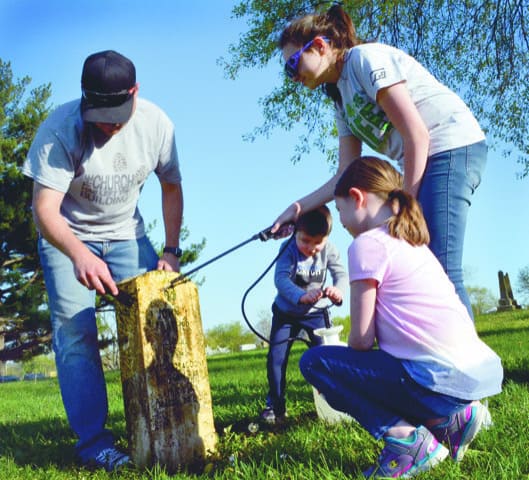 When Pastor David Smith found a way to express his respect for veterans of the U.S. military, he invited members of his church and community to join the effort. Smith, who leads First Baptist Church in Grayville, recently launched an initiative to clean the headstones of veterans buried in his town.

Smith got the mayor’s approval and researched what cleaning products are safe to use on the headstones. For six weeks, he and his family worked with a group of volunteers to scrub around 1,000 grave markers for veterans of several wars, including the War of 1812, Civil War, both World Wars, and the conflicts in Korea and Vietnam. When the group finished cleaning the headstones, they moved on to the flat markers.

“The longer we worked, the more appreciation and respect we had,” Smith said. As they worked, looking at before-and-after pictures of the projects gave the group energy to move on to the next. The volunteers’ goal was to finish their work in Grayville’s cemetery by Memorial Day, and they succeeded.

“What an honor it has been to clean our veterans’ markers and show them the respect we have for them,” Smith said, “and thereby our appreciation for the freedoms we have.”

Photo above: Pastor David Smith (left) and his family clean the headstone of veteran of the Mexican American War.